Home Premier League Arsenal Tottenham have advantage over Arsenal for signing – Player set up for...
SHARE

Last week Marca published a big article on the future of Lucas Vazquez, explaining he’s considering leaving Real Madrid when his contract expires at the end of June.

Given the claims, it was inevitable Premier League clubs would quickly be linked with a move for the 29-year-old, and that happened at the weekend in the shape of Tottenham and Arsenal.

Both London clubs have been credited with interest in the Real Madrid player in the past, with Arsenal having the most links with stories going back to 2018. Tottenham have more recently come into the picture, and it’s assumed Vazquez is a player Jose Mourinho would appreciate.

Monday’s edition of Mundo Deportivo takes claims from England of interest from the two clubs, and then sets out the player’s position.

Marca had earlier explained that Vazquez is one of the lowest paid players in Madrid’s squad and reacted to his renewal offer with huge disappointment. That’s because there’s no pay hike, and he’s expected to also accept a 10% pay cut, due to the impact of the Covid-19 pandemic. 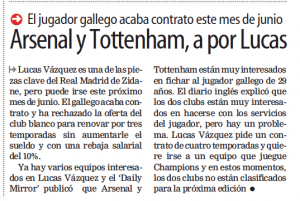 Unsurprisingly, that isn’t good enough, but Vazquez isn’t just going to join the first club which approaches him. He wants a four year contract and to sign for someone who can offer Champions League football.

That would give Tottenham an advantage, with them six points ahead of Arsenal and just three points off the qualification places.

As it stands, Lucas Vazquez ‘can leave in June’ having rejected Real Madrid’s offer.