Home Europe ‘It is not true’ – Club send out strong message after Liverpool...
SHARE

Mundo Deportivo report on Monday that Barcelona have sent out a clear message regarding Georginio Wijnaldum.

Sunday saw claims in the English media that the Liverpool player has already agreed a contract with the Blaugrana and will move there in the summer. With his deal at Anfield expiring at the end of June, the Dutchman is entitled to speak to other clubs and even agree a move to them.

However, it’s insisted that hasn’t happened yet with the La Liga club, and Mundo Deportivo state Barcelona sources have told them ‘it is not true’. There is interest in the Liverpool player from the Camp Nou, because he’s considered a good opportunity for the summer.

Ronald Koeman likes his compatriot, and Wijnaldum’s experience is highly valued. That he’d arrive on a free transfer is another boost, but there’s insistence there’s no agreement at this stage and reports stating otherwise aren’t correct. 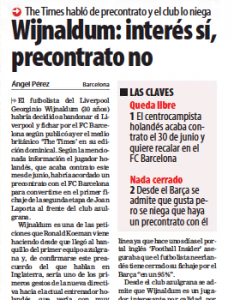 There’s optimism of a bright summer of transfers under Joan Laporta, and getting Wijnaldum would be a good way to kick things off.