Malcom has been restricted to just 25 minutes on the pitch since arriving at Barcelona from Bordeaux in the summer.

A ‘Top Secret’ report from Mundo Deportivo claims that Inter Milan, Tottenham Hotspur and Arsenal are the clubs that ‘might be interested’ in the winger.

At the Camp Nou, the leaders of the Blaugrana remain hopeful the Brazilian shows his patience in order to showcase his talent.

It’s claimed the 21-year-old has already held talks with his manager, Ernesto Valverde, and has ‘asked to leave’ the La Liga winners in January, if his situation does not improve.

The South American is yet to understand why he is not featuring for the Catalan club and during a recent conversation with the former Athletic Club Bilbao boss, he asked his coach what he needs to improve in order to get on the pitch.

Mundo reports that Valverde informed Malcom that there is nothing wrong with him, but other options are simply being preferred.

This has alerted the European clubs, who have already probed the possibility of signing the wideman, either on loan or a permanent transfer.

It is not the first time Tottenham are linked with the same player as they tried to sign him in January 2018, when he was at Bordeaux.

According to the Telegraph, the north London side were then favourites to sign Malcom for £35m, but their failure to seal the deal saw them sign his compatriot Lucas Moura from PSG. 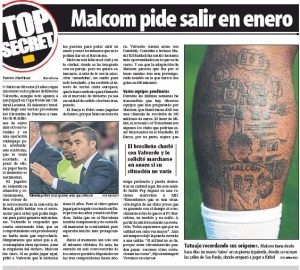 Mauricio Pochettino’s side could make an approach for Malcom, a year after they failed to land him.