Real Madrid promoted their Castilla coach Santiago Solari to the first team and he is ‘temporary manager’ after Julen Lopetegui’s exit from the club.

Mundo Deportivo claims Antonio Conte, who was sacked at Chelsea in July, was best placed for the job at the Spanish capital club, but he failed to find an agreement with the La Liga giants.

Tottenham Hotspur manager Mauricio Pochettino is the favourite, but the Catalan newspaper mentions it is ‘difficult’ to bring him to Santiago Bernabeu during the middle of the season.

The former Southampton manager was the preferred candidate to be Zinedine Zidane’s successor, but AS reported the Argentine did not push for an exit in the summer. 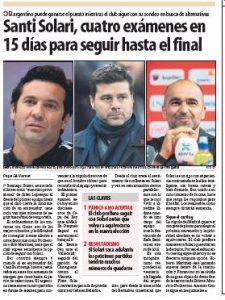 Real Madrid’s idea is to continue with Solari until the end of the campaign and hope that he could be the new Zidane, who also took charge of the club at a similar situation following Rafael Benitez’s sacking in January 2016.

Florentino Pérez wants to avoid any mistake while appointing the club’s next manager and Mundo reports that it is impossible for the 13-time European champions’ president to forget about his ‘great object of desire’, Pochettino.

Whether Perez and Real will be able to convince Pochettino to leave Tottenham and join them remains to be seen. Meanwhile, Belgium coach Roberto Martinez is also another candidate.