It’s the time of year when players at clubs likely to be relegation doomed start to pack their bags and look for a lifeboat to save them from the sinking ship.

Over the past week several Huddersfield Town players have come out and made it clear they don’t think Championship football is for them, whilst similar has been happening, although not to the same degree, for Fulham.

Ryan Babel’s will be free to move wherever he wants when his Fulham period expires in the summer, and it’s been reported that Luciano Vietto could be off to Sporting.

The Atletico Madrid player was loaned to Fulham for the current campaign but has once again struggled to show the talent he has. Atletico owe Sporting money for the transfer of Gelson Martins, who rescinded his contract after trouble at the Lisbon club, and the suggestion is that Vietto moving could be part of a deal. 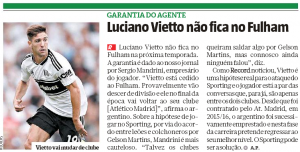 Record have spoken to the player’s agent Sergio Mandrini, and he explained: “Vietto is loaned to Fulham. They will probably go down and he will return to his club at the end of the season. Maybe the clubs want to work something for Gelson Martins, but nobody has spoken with us yet.”