Home Premier League Chelsea ‘The player is delighted’ – Chelsea have ‘taken the lead’ in signing...
SHARE

Chelsea have emerged as the main contender to sign Sevilla star Jules Koundé in the summer.

Earlier today, ABC Sevilla stated the Blues ‘interest in real’ and they have ‘reached an agreement’ with the defender for a contract until 2026.

Marca on Wednesday claim that ‘some important clubs’ were not going to let the opportunity to sign the 22-year-old to ‘slip away’ and this includes Chelsea.

For now, the Champions League winners have ‘taken the lead’ to acquire his services and ‘the player is delighted’ with this.

The France international has been waiting for a top side to knock on his door and he’s excited with the approach made by the west London club.

Thomas Tuchel wants to improve his side’s defence by adding the former Bordeaux man to the squad at Stamford Bridge.

Sevilla, for their part, don’t want to sell the centre-back for less than €70m, and so far, they have not received a call from the Premier League side. 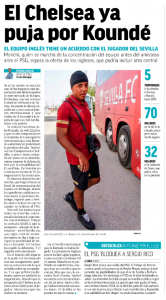 Monchi waits for an offer from Chelsea and Marca suggest the Blues may include their own player as part of the proposal.

The Sevilla sporting director doesn’t favour this formula, but there may be a name that could be fit well for the La Liga side.

Tuchel doesn’t count on Kurt Zouma, and Monchi loves him. The 26-year-old Frenchman could take Koundé’s place at Sanchez-Pizjuan and form a new wall along with Diego Carlos.