Earlier this week, Tottenham Hotspur confirmed the signing of Bryan Gil from Sevilla and as part of the deal, Érik Lamela moved in the opposite direction.

Having come up through the ranks of the La Liga side’s youth system, the 20-year-old wasn’t enjoying regular minutes with their first team.

Sevilla allowed the winger to spend the last 18 months out on loan at Leganés and SD Eibar, and it was his form for the latter that had caught attention from elsewhere.

Gil played under the orders of José Luis Mendilibar at Eibar and the manager left them after the club were relegated from the top flight last season.

Marca interviewed Mendilibar and on his former player’s move to north London, he said: “It’s a great signing for Tottenham and a good step for Bryan.”

Mendilibar has also given an insight on what the Tottenham fans can expect from Gil.

“When he said goodbye, I told his agent that a club was coming with money and he wasn’t going back to Sevilla… and that’s how it was. He can handle the 90 minutes well and makes great efforts,” the coach explained.

“Someone may think what he’s going to do with that little body, but Bryan is a different player: skilled, fast, with guts…”

“When David [Silva] arrived at the Premier I also read a [Manchester] City player saying that he was small and look what he has been doing for 10 years. He only needed to win the Champions League.”

“When he arrived at Eibar, both in training and in games, he played from receiving. I told him: ‘You have to try to steal because the rivals are not ready to defend you.’ He must improve that, be more rogue,” he stressed.

Former Tottenham midfielder Mohamed Alí Amar, simply known as Nayim, has also given his take on Gil’s decision to join the Premier League side. 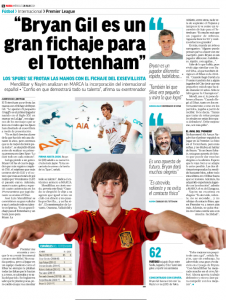 “He’s a good signing, a great bet for the future that can give the fans a lot of joy. I hope he does well and he adapts as soon as possible. The last two seasons he has performed quite well, especially this last one at Eibar until he was injured. In addition, he has gained experience playing for the national team,” Nayim told Marca.

“He is daring, brave, does not hide… and does not shy away from physical contact, which in Premier League is going to have even more. In addition, he removes rivals in the one against one very easily.”

Marca themselves say La Liga is ‘losing a genius’.