Udinese striker Fernando Llorente has refused to rule out a possible return to the Premier League with Watford in future.

As you’ll be aware at this point, Udinese are owned by the Pozzo family, who also have the controlling stake at Vicarage Road.

That’s seen the two clubs intrinsically linked over the years, with the Pozzo’s loving transfers between the clubs if they can pull it off.

That’s already seen Watford benefit on more than one occasion, while a few players, most notably Gerard Deulofeu, have made the move to Italy.

Llorente currently finds himself playing alongside the Spaniard, having joined them in January this year on a free transfer from Napoli.

At 36-years-old the Spaniard is very much in the final years of his career, which has seen him play in Spain, Italy and England, the latter over spells with Swansea and Tottenham. 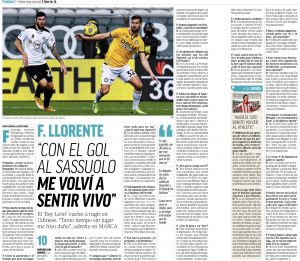 The Pozzo link with Watford could give him a chance at a third spell, something he admits he can’t rule out.

“I don’t know,” he told Marca when asked if he sees himself back in the Premier League.

“The Premiership is amazing. I have lived very nice moments there.

“I’m always open to any possibility, but what I want is to look good, keep improving after such a long time out of action and score a few more goals.”