A couple of weeks ago we covered claims from Spain regarding Yunus Musah’s exit from Arsenal. The 18-year-old came through the ranks of the Premier League club, and then walked out on them for Valencia in summer 2019.

According to Spanish reports, Unai Emery, who was then in charge of the Gunners, was left ‘hurt’ by the transfer. It was an ‘unexpected escape’ and the Spaniard had been planning to give the youngster his breakthrough with Arsenal.

Of course, as far as Valencia were concerned this was something of a coup, and made a change to clubs swooping in and snatching their young talents away. Musah is beginning to make a name for himself at the La Liga side, and that’s seen Euro signs appear in the eyes of those in charge at the Mestalla.

Valencia announced the player’s renewal on Friday, and it’s believed to be a shrewd move ahead of the upcoming Brexit impact on football. Given it will now be more difficult for Premier League clubs to recruit from the EU, it’s thought the value of players with a UK passport is going to rise. 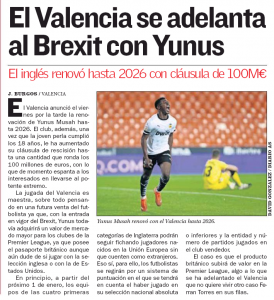 Therefore, Valencia, who have included a €100m buyout clause in Musah’s new deal, are lining themselves up a Brexit bonanza, report AS, with the idea being they can sell the player to an English side once his value hits its peak.

Should that happen, Arsenal will obviously be kicking themselves.