Royal Antwerp will travel to Scotland this week to take on Rangers in the second leg of the Europa League round of 32 tie on Thursday.

According to Het Belang van Limburg, Dieumerci Mbokani, Faris Haroun and Dylan Batubinsika will not make the trip to Glasgow with the Jupiler Pro League side.

Mbokani saw his side suffer a 4-3 home defeat at the hands of Rangers last week away from the pitch as he missed the tie due to an injury. Royal Antwerp received encouragement when Mbokani came off the bench last weekend against Sint-Truiden.

However, HBVL now claims Antwerp manager Franky Vercauteren ‘doesn’t want to take too much risk’, which is why the 35-year-old will not be featuring against Steven Gerrard’s side. 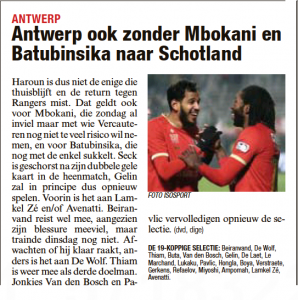 Batubinsika will not face Rangers due to an ankle injury. He will not be the only absentee in the heart of the defence as another centre-back, Abdoulaye Seck, is suspended for the tie.

The first leg deficit to Rangers, coupled with missing out on a few players is likely to make Antwerp’s task to progress to the next round of the Europa League even harder.