Over the past week the Portuguese media have presented Rangers player Alfredo Morelos as a target for FC Porto.

The club are in search of a striker in the summer window, and Morelos was put forward as an option, however, it was considered a difficult deal to do. Other targets were likelier for Porto than the Rangers man, with it thought Steven Gerrard’s side would be asking too high a transfer fee.

Saturday’s edition of A Bola changes much of that, and pushes things forward.

The Portuguese newspaper states Morelos is ‘analysing’ a proposal to join Porto, and his agent, Michael Gorman, has travelled to Portugal. Once there he held a meeting with officials from the Liga NOS club, in an ‘attempt’ to come to some kind of agreement, presumably on personal terms. 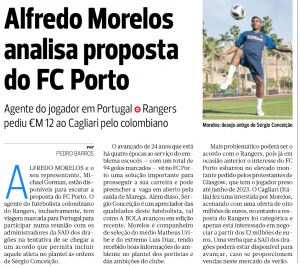 Sérgio Conceição, Porto manager, is presented as being keen on Morelos, and the Rangers player believes he can advance his career with Porto, likely ahead of a future step elsewhere.

Much more difficult than convincing the player will be reaching an agreement with Rangers, something which A Bola acknowledge.