Home Europe Price set for Hull star as club ready to cash in on...
SHARE

Arriving on loan from Inter Milan in January, Andrea Ranocchia has been one of the strangest Hull City success stories of the season.

Once the captain of the reputable European club, the 29-year-old is now one of the key players in Marco Silva’s side, as the Tigers continue their impressive great escape from the relegation zone.

Scoring two goals and picking up two assists in 12 league appearances, Ranocchia is expected to return to Serie A come the end of the season, due to the lack of option to buy in his loan deal.

However, with no future at his home club, a move to the Premier League is anticipated, as explained by Gazzetta dello Sport on Tuesday, following his impressive performances in England. 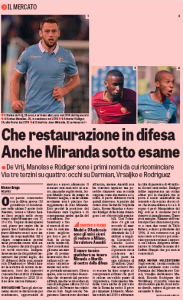 Whether that means a return to Hull remains to be seen, but if Marco Silva manages to keep the Tigers up, an extended spell at the KCOM Stadium, where Ranocchia appears happy, could be on the cards.

Gazzetta explain that, with two years left on his contract and a renewed status, Inter Milan are likely to ask for a fee of around €10-12m for their centre-back, an affordable fee for most Premier League sides.

One to keep an eye on, certainly.