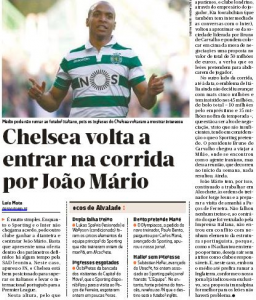 The old news is back, and Chelsea could still sign João Mário from Sporting.

The Portuguese club still haven’t reached an agreement with Inter Milan, and according to Jornal de Notícias, this could give a chance to Chelsea to win the race.

Internazionale are struggling to meet Sporting’s demands, which is €50m. The Italian club can only get to €35m plus €10m in bonuses, and it’s not pleasing Sporting president Bruno de Carvalho.

Jornal de Notícias says that now Kia Joorabchian is thinking of putting a bid from Chelsea of €50m on the table. We must say that’s a very strange thing to claim, as if Kia would have the power to decide how much will Chelsea offer.

João Mário doesn’t want a fight with the club, so he’s training normally as he waits for his situation to be sorted. This saga has dragged on for months, and it will be probably continue until the last days of the market.