Home Championship From Portugal: Wolves signing to add ‘experience and quality’, could be more...
SHARE

Just like we expected, the Portuguese press is pretty glad Wolverhampton Wanderers are signing one more of their players this summer.

Even though the local papers don’t have any exclusives on João Moutinho’s move today, they all highlight the transfer, with Record giving the story an entire page.

The newspaper writes that the 31-year-old delivers ‘experience and quality’ to Wolverhampton’s midfield, with Nuno Espírito Santo picking an experienced player to support Ruben Neves.

Record also claims that Moutinho should give ‘consistency’ to the team, and proves that by showing the number of games he’s made in every season of his career, calling him a ‘marathoner’. 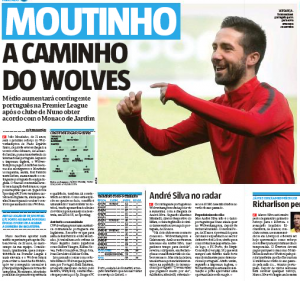 They also give a special mention to Ruben Vinagre, Pedro Gonçalves and Diogo Jota, who are the other Portuguese players in the squad.

And the ‘authentic community’ at Wolverhampton could still grow, as André Silva and Pepe also get a short article just for being recently linked to the club.

We’re pretty sure the Portuguese media would love those signings too.