Hull City’s dismal defeat against Tottenham Hotspur this weekend was much covered in Portugal, even making snippets in today’s newspaper.

The interest from the local outlets is obviously due to manager Marco Silva, who is now getting to the end of his contract with the Tigers, according to the Portuguese press, and told the press he still doesn’t know where will he be working next season.

What the Portuguese papers are doing today is not blaming him for the big defeat or for relegation. They are mostly taking his quotes and speculating about his future, with only O Jogo claiming to have some exclusive information. 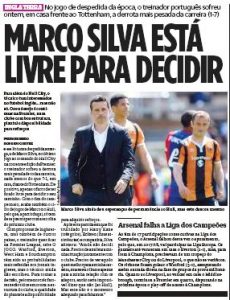 The newspaper says they know that despite some offers from other countries, Silva’s desire is to sign for another Premier League club.

There are three factors he will analyse: the club’s structure, the quality of the squad and the availability to make new signings.

Then O Jogo takes Watford, Everton, West Ham and Southampton as the most mentioned clubs in the English press, although it’s claimed that Silva has not chosen where he will go to yet.

The fact that he’s now free to chose his future is taken as ‘the only positive’ thing from Sunday.