Things have become a little difficult for Ruben Semedo to stay at Sporting CP after Sunday’s game against Chaves.

After being sent to the bench for a few fixtures and linked with moves to France and England, the player wasn’t very welcomed by the club’s fans for the last game of the season.

In the middle of many protests against Sporting’s disappointing season, fans unfurled a banner saying ‘Ruben Semedo, bon voyage’, as reported by Record. 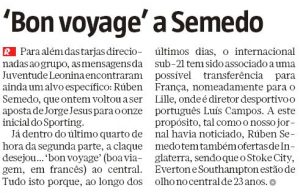 The message was in French because a Lille director was said to be in Lisbon to try to sign the player over the weekend.

But other local reports have been saying that Everton, Stoke City, Newcastle United and Southampton are all in the race as well, with the Saints being said to be on the lead.

Southampton have been the Premier League club linked for the longest amount of time, with links to Claude Puel going back some months.

This protest should only accelerate the process for Semedo to leave Sporting. It’s been said reported Sporting would accept only €15m for him, even though he has a €45m release clause, so it all sounds like the club won’t make any effort to keep a player who the fans don’t want there.