Porto’s upcoming game against Rangers for the Europa League is starting to take over the Portuguese media this week.

Steven Gerrard has been a big part of that, given the fame of the Ibrox manager, and players, led by Alfredo Morelos, have enjoyed their own coverage.

With the Dragons needing a good result to keep their chances of qualifying for the knockout stage alive, the local press has been a little worried about their chances.

Flying to Glasgow isn’t something very exciting for the club. Because, as reported by A Bola today, Porto have lost the three games they’ve played in the Scottish city.

That’s why they write it’s a ‘cursed city’ for the Dragons, and now their fans are demanding ‘more soul’ from the team so they can change this history against Rangers. 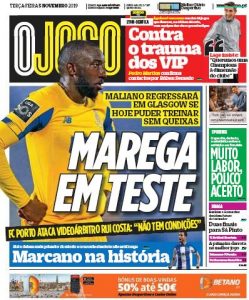 First one is that Moussa Marega should be back in the team against Gerrard’s men. The Dragons were afraid he could get injured in the last three games, and that’s why he’s been left out. His last appearance was against Rangers, when the clubs tied 1-1 at the Estádio do Dragão.

Another important player who’s confirmed in this game is Otávio. The midfielder asked to be brought off during the game against Aves at the weekend, and that’s why there had been some concern about his condition. Thankfully for Porto, was just tired, and should be fit to play against Rangers on Thursday.