Home Europe Player’s transfer to Southampton ‘will be completed today’, will undergo medical in...
SHARE

Last month, reports coming out of Belgium suggested that Southampton are interested in signing Moussa Djenepo from Standard Liège.

On May 17th, the Jupiler Pro League side’s manager Michel Preud’homme confirmed “there are noises, chats, contacts” from the Saints with regards to the 20-year-old.

It’s claimed the Belgian side and Ralph Hasenhüttl’s club have now agreed a transfer fee for the Mali international to make a switch to England.

Standard Liège were hoping to extract €23m from the sale, but the deal agreed between the two clubs is now believed to be around €12m plus €3m in bonuses. 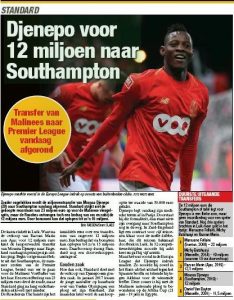 Djenepo will undergo his medical in Paris and if he clears it, then ‘nothing will stand in his way’ to join Southampton, where is expected to sign a five-year deal.

Djenepo has 11 goals and six assists to his name in all competitions during the 2018/19 season.