On May 15th, we carried a report from Cadena Ser, who explained that Manchester City, Barcelona and Bayern Munich are interested in Rodri and the midfielder ‘will leave’ Atletico Madrid after this season.

Later that day, AS made it seem a transfer to the Etihad is a very possible scenario as City are the ‘most interested’ club.

Interestingly, they also stated Rodri wouldn’t be a huge loss for Atletico, which sounded like them getting fans ready for bad news.

Thursday’s edition of Catalan newspaper Sport brings the latest update on the 22-year-old and it should come as positive news for Manchester City.

They take a look at interest from City and Barca, and claim he is a ‘priority’ signing for Pep Guardiola and director of football Txiki Begiristain.

At the Camp Nou, they view him as a long-term replacement for Serio Busquets, but he’s not a priority for them in the next transfer market.

Having said that, the sporting leaders of Barca wanted to position themselves if there was a possibility for Rodri to leave Diego Simeone’s side.

That’s when they received a response from the player’s environment that his move to City is ‘practically closed’ and he is ‘excited about the possibility of playing in the Premier League’. 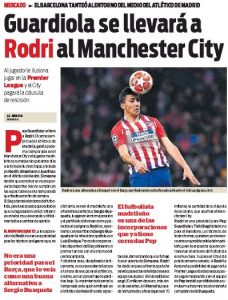 Sport now takes it as a done deal by further suggesting that ‘Pep Guardiola takes Rodri. The Atlético de Madrid midfielder will play next season at Manchester City.’

City will have to pay his €70m release clause to seal the deal.