Barcelona have very ambitious transfer plans this summer and need to raise funds to be able to finance their purchases.

A deal to sign Ajax’s Frenkie de Jong has already been agreed, and Barca are also looking to sign his Dutch teammate Matthijs de Ligt. This week Antoine Griezmann announced he’d be leaving Atletico Madrid, and the Camp Nou is also thought to be his likeliest destination.

One player on the exit ramp is Philippe Coutinho, and Marca explain the Brazilian is for sale regardless of whether Griezmann arrives or not. Chelsea ‘seem the most interested’, according to the Spanish newspaper, and it’s the Blues being linked more than any other club right now.

Maurizio Sarri’s side have a transfer ban hanging over them, and unless Chelsea can overturn that at the Court of Arbitration for Sport they won’t be signing anyone this summer. 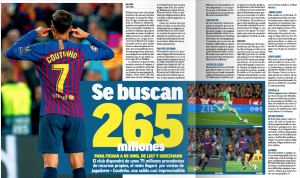 If they’re successful, Marca believe Chelsea would have to part with €100m to sign the former Liverpool player.

Given how keen Barca are to get funds in, it’s not unrealistic to think a discount may be available on that.