Monday’s edition of L’Equipe carried on their claims that Everton are interested in Michy Batshuayi and claimed a move to AS Monaco wasn’t agreed, despite reports of the player travelling for a medical.

The striker, who had a difficult first half of the season on loan at Valencia, was said to have been ‘requested’ by Everton, but Chelsea hadn’t even decided what they wanted to do with him at that stage.

On Tuesday afternoon, we covered further claims from RMC that Everton interest is long standing and the club aren’t dropping it.

Despite Batshuayi being keen on a move to Monaco, according to RMC, a permanent move to Goodison Park remained a possibility. 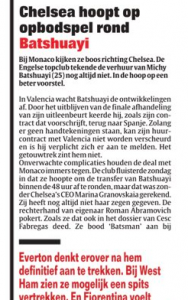 It’s claimed Marina Granovskaia has offered the player to Everton, who are considering a permanent transfer.

West Ham are also a possibility, but Batshuayi has ‘given his word’ to Monaco, who hope Chelsea will forget their ideas of a financial tussle and just agree to a loan.