A handful of clubs travelled to the North of Portugal to watch Aves playing Braga in the Portuguese Cup on Tuesday night. But one of the names in the scouting list has caught our attention.

According to newspaper A Bola, Portsmouth were one of the sides who watched the home team losing 2-1 and get knocked out of the tournament.

Premier League clubs are always watching matches in Portugal, and visits from Championship sides are often reported. But this is perhaps the first time we see someone from League One doing a scouting job there.

A Bola doesn’t know exactly who Portsmouth were watching, as it’s just mentioned they were along Arsenal, Atalanta and AC Milan at the game. 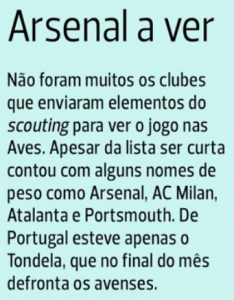 With Braga going to 2-0 with a brace by striker Wilson Eduardo, Aves had a tough job trying to equalise. They scored a goal in the 70th minute and kept pressing until the end, but were stopped by goalkeeper Marafona.

Besides Wilson Eduardo, another man to watch was Derley, who organised Aves’ attack and had the best chances to match the score.

Braga players are often expensive and unlikely to move to a country’s third division, but we wouldn’t say the same about Aves. So we’ll keep an eye on the Portuguese media and see if Portsmouth are soon linked to any players.

Tottenham could swoop in for signing ‘any minute’ – Spurs’ interest...

Chelsea have ‘officially contacted’ club for signing – Blues will ‘present...