For a long time, the future of Ezgjan Alioski was up in the air at Leeds United as his contract was set to expire on June 30th 2021.

There were talks that Galatasaray were doing their best to lure him to Turkey, but that move never materialised, and the now ex-Elland Road first-team player is without a club.

No renewal agreement with Marcelo Bielsa’s side was ever reached, meaning the North Macedonia star, who featured at the Euros, is now free to choose his next destination, which could be AS Roma.

The player has since been replaced by Leeds, with the arrival of Junior Firpo confirmed on Tuesday, and Alioski will now try and further his career elsewhere.

Il Tempo in Italy state José Mourinho ‘likes’ the former Elland Road regular, and his arrival would do the club the world of good, having recently lost Leonardo Spinazzola for the foreseeable future to a ruptured Achilles. 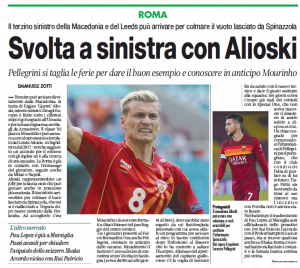 The newspaper say Roma are already in talks with the player’s agent, who are also having to deal with the likes of Milan and Napoli.

It appears that Alioski could end up landing on his feet nicely after his Leeds exit, although few at Elland Road are likely to care, now fully focused on getting the best out of Junior Firpo.