Newcastle United could be an option for Real Madrid’s Eden Hazard.

The forward joined the La Liga giants in 2019 and has hardly managed to impress since then. On Monday, journalist Sacha Tavolieri stated the 31-year-old wants to leave the club in order to have greater prominence elsewhere.

Claims made by Tavolieri are relayed by Mundo Deportivo, who then provide additional information on this case. The newspaper claims the Belgium international’s options are ‘limited’.

There were rumours about a possible return to Chelsea, but the ‘truth’ is that Thomas Tuchel has attacking positions ‘well covered’.

Another ‘option’ could be a move to the Tyneside club. Hazard’s name has ‘come out’ at St James’ Park, where their owners, Saudi Arabia’s Public Investment Fund, are ‘considering a revolution’. 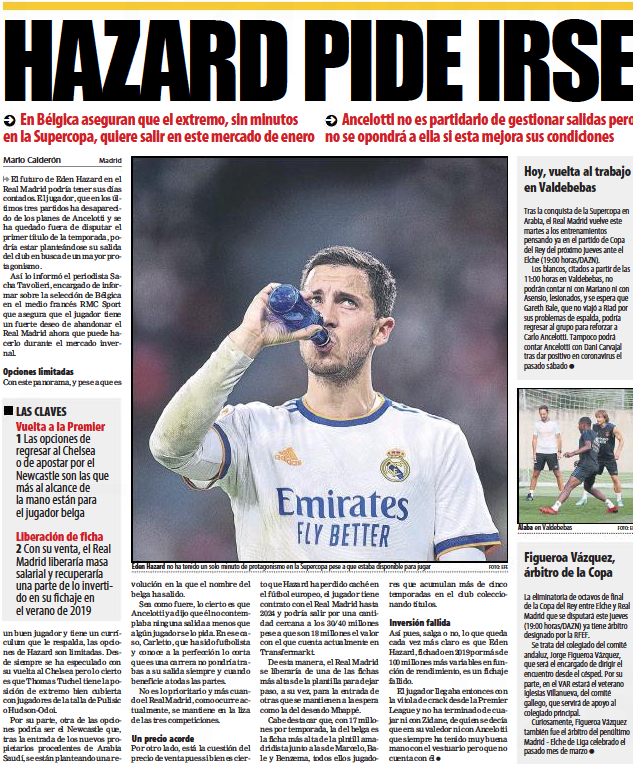 Carlo Ancelotti has stated he doesn’t want any players to leave the club in January. However, the former Everton manager ‘would not hinder’ Hazard’s departure, as long as the deal benefits all parties involved.

Los Blancos’ priority is to keep the player, whilst they are still in contention to win three competitions this season.

On the other hand, Hazard has seen his valuation drop over the years and could leave for an amount of €30-40m. This will allow Real Madrid to get rid of the highest paid player in their squad, with a salary of €17m [likely net] per season.

For now, Hazard is an option for Newcastle. However, there is nothing concrete in Mundo’s report to suggest the Magpies will make an approach for the Belgian in January.