Newcastle United remain keen to sign a new centre-back in the winter market and among the targets identified by them is AS Monaco’s Benoît Badiashile.

Last week, L’Equipe stated the Tyneside club held a meeting with the Ligue 1 side regarding a potential €40m deal involving the defender.

Today’s edition of the same newspaper explains talks between the two clubs have continued ‘in recent hours’ about the 20-year-old.

With talks ongoing for the past 10 days, it led to an offer of €40m [excluding bonuses]. However, the proposal made by Tyneside club ‘did not result in an agreement’.

The money offered by the Magpies is ‘below expectations’ of the French club. The player is currently sidelined with a hamstring injury since January 9th and is expected to be out of action for three to four weeks. 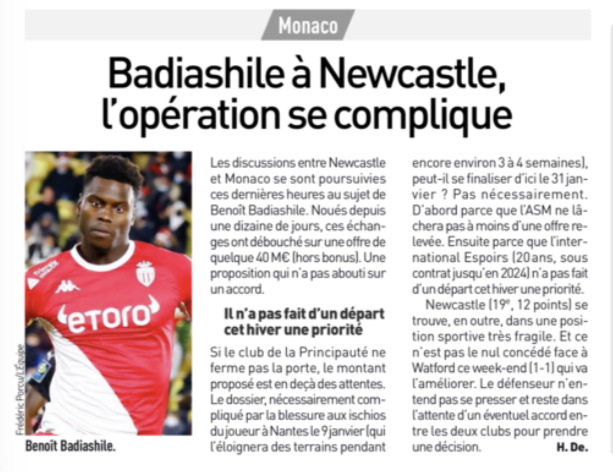 Monaco, for their part, have no intention to let the France U21 international leave this month unless there is an improved offer from Eddie Howe’s side. The defender has also not made it a priority to change clubs in January.

Badiashile ‘does not intend to hurry’ and is waiting for a ‘possible agreement’ between Newcastle and Monaco to make a decision on a potential move to St James’ Park.

These factors make the operation to take the Frenchman to Newcastle ‘complicated’.