Monday’s edition of L’Equipe has a transfer special and it’s no surprise that the French newspaper drag Paul Pogba into the equation.

The Manchester United midfielder has been linked with a move away from Old Trafford for some time, and the rumours have been helped by the player himself, his agent Mino Raiola, and his brothers.

L’Equipe report that despite recent claims otherwise, Pogba remains ‘determined’ to leave the Premier League club in the summer transfer window. He’s resisted attempts to extend his contract, which puts him in a better position to leave Manchester United.

A return to Juventus is talked down by L’Equipe, who instead push the idea of a move to Real Madrid again.

It’s pointed out that given Pogba will soon be two years from the end of his contract he’ll be able to use Article 17 of the FIFA transfer regulations. This would, in theory, enable him to buy out the remainder of his Manchester United contract, given he’ll have completed the first three years. 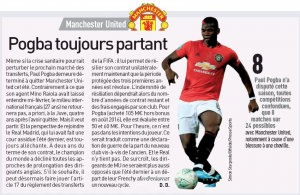 However, they also state this would be declaring transfer ‘war’ and that it’s not Pogba’s intention right now.

Article 17 has been mentioned on occasion before with other players, although it’s never been used in a big transfer. In the past, it’s been stated the legality of it isn’t concrete, especially when it comes to amounts, and clubs would be against taking advantage in case they opened a can of transfer worms and ultimately harmed themselves.