Philippe Coutinho’s failure to impress at Barcelona has convinced the Catalan club to offload him this summer, once he returns from his loan spell with Bayern Munich.

There’s been repeat claims the former Liverpool star wants to return to the Premier League. On July 29th, Mundo Deportivo explained Arsenal are ‘best placed’ to sign the Brazil international.

Wednesday’s edition of Sport claims the La Liga side are ‘prioritising’ the 28-year-old’s exit.

As per the report, there’s a lot of expectation with Coutinho, who ‘could land at Arsenal’, in an operation that could benefit the Camp Nou side.

Kia Joorabchian, the South American’s agent, also manages Willian, and the representative is ‘very close to closing’ the Chelsea winger’s move to Arsenal. The report adds ‘Coutinho could be next’, suggesting he could follow Willian to the north London club.

It’s claimed the Gunners ‘love’ the Barca owned player, and ‘all parties must make an effort’ for the transfer to take shape. ‘Decisive days’ are ahead in defining Coutinho’s future and ‘everything is beginning to be well underway’. 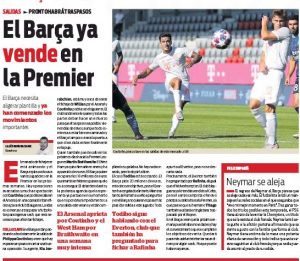 Even though Barca want to make ‘cash’, the outlet doesn’t make it clear if Arsenal want to take Coutinho on loan or a permanent transfer this summer.