Mundo Deportivo journalist Miguel Rico now states the Gunners are the ‘best placed’ side to take the 28-year-old.

Kia Joorabchian, the former Liverpool star’s agent, has been ‘working for months’ to help the Brazilian return to the Premier League.

Joorabchian, who has a ‘great relationship’ with Arsenal chief Raul Sanllehi, has negotiated with Mikel Arteta’s side for Coutinho’s transfer.

This led to rumours of Mattéo Guendouzi being offered as part of the deal for Coutinho. However, the La Liga giants have made it clear that they are not interested in the Frenchman.

Quique Setién’s were initially willing to let the player go out on loan (with a loan fee, plus Coutinho’s full wages taken care of). Rico now claims the Catalan club want, and need, ‘money and only money’ for the South American.

Apart from Arsenal, Leicester City and Newcastle United are interested in the attacking midfielder, but none of them have taken the final step for his signing. 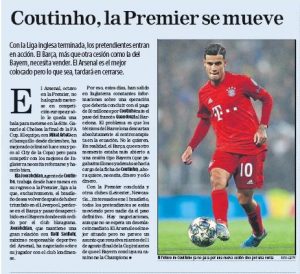 Coutinho’s on loan at Bayern Munich and he will be with the German side until the end of this season’s Champions League.

It’s stated twice that Arsenal are the ‘best placed’, and negotiations for the player’s transfer continue.