Manchester United face PSG on Tuesday evening in the Premier League club’s first group match of their return to the Champions League.

The French club are considered strong favourites, after they managed to reach the final of the competition last season. PSG lost to Bayern Munich, but it’s encouraged a renewed belief that Europe’s biggest football trophy is well within reach.

Tuesday’s edition of L’Equipe has multiple articles on the match, and one, about Paul Pogba and Bruno Fernandes, stands out from a Manchester United perspective.

As far as the French newspaper is concerned, the two midfielders have work to do if they’re to build their partnership on the pitch. L’Equipe state it’s ‘undeniable’ that Pogba will have been envious when seeing Fernandes’ impact at the English club.

Gilles Grimandi, formerly of Arsenal as both a player and scout, believes signing the 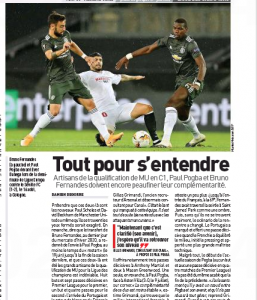 Portugal international was ‘very wise’, yet when it comes to his on-pitch relationship with Pogba, he says: “The complementarity of this duo is less established.”

Grimandi doesn’t feel Pogba has really got going this season, and he believes it’s not down to physical reasons. Given the player has been fine with the French national team, the pundit believes “it’s more personal” than physical.