Manchester United are having a packed few days.

On Sunday, Jose Mourinho’s side lost to 3-1 to Liverpool in the Premier League, then on Tuesday the manager was sacked.

That same day it became clear Ole Gunnar Solskjaer would be taking over at Old Trafford on a temporary basis, and the new Manchester United boss arrived in the city on Wednesday.

Thursday morning sees him take his first training session at Carrington and start the real work. Getting the most out of Paul Pogba will be a big part of that.

Solskjaer is on record saying he’d build a team around the World Cup winner, and L’Equipe say the attitude has ‘been welcomed with kindness’ in the Pogba camp. 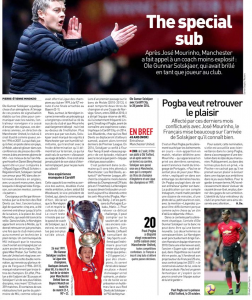 They also quote a member of the player’s entourage as saying Pogba “didn’t feel like playing for Mourinho anymore”.

It’s stated that the midfielder was so tired with Manchester United’s style that he didn’t take pleasure being part of a team with ‘such weak ambitions in the game’.

All involved will hope things are different under Solskjaer.