Barcelona very much want a defender in the January window.

Today’s edition of Catalan newspaper Sport says the club want a deal sorted within the next 24 hours, which may be a little optimistic.

Marca also take a look at the situation, and Everton’s Yerry Mina plays a big part in it.

A shaky start from the Colombian maybe could have been lived with at the Camp Nou, and patience won out, but Everton’s ‘irresistible’ offer changed everything and leaves Barca still scrambling around for a defender.

Marca state: ‘The offer of the Everton was irresistible. So the club had to sign again.’

And that’s on top of Clement Lenglet. 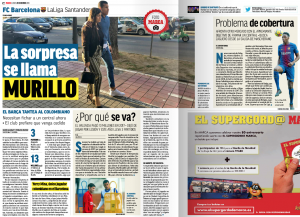 Interestingly, one of the candidates is Valencia’s Jeison Murillo, who Marca say knows Mina very well.

Given the Everton player’s time at Barca was ‘not too good’, it may make his fellow Colombian think twice.

Barcelona spending in any regard is good for the Toffees and their chances of getting Andre Gomes on a permanent deal.