Daniel Grimshaw has been with Manchester City from a very young age and despite coming through the ranks of the Citizens’ academy, he is yet to feature for their first team.

The goalkeeper was the fourth-choice goalkeeper for City’s first team and trained with them for two years.

Last summer, Pep Guardiola’s side sent him out on loan to Lommel SK and he hasn’t enjoyed regular minutes in the second division of Belgian football this season.

Grimshaw had to wait until this week to make his first appearance for Lommel in their 1-1 draw against KVC Westerlo.

Het Belang van Limburg interviewed the player, who at the age of 23 is ‘at a crossroads in his career’. Grimshaw has revealed he doesn’t regret his decision of not venturing out much earlier in his career.

“It is now time that my career really takes off and that I can play as much as possible. I could have started earlier, but I consciously chose an intermediate step with the first team of Manchester City,” Grimshaw said.

“You have to respect certain decisions. The most frustrating moment is in the preparation when you are told that you are next to the spot below the bar. Although you also have to stay professional and be ready when the moment comes, like Monday against Westerlo. I believe in a positive story and I certainly don’t want to think that my career could end badly.

“I was the fourth goalkeeper in the dressing room next to Vincent Kompany and Kevin De Bruyne. I trained every day with these special players for two years. They are stars to the outside world, but to me [they are] modest guys.

“As a City fan and teammate, Kompany is a legend. I can still walk the streets in Manchester, he can’t anymore. Unfortunately, I didn’t get any silverware either, because you only get an official medal in at least five matches.”

Grimshaw’s contract with City will expire at the end of the season. He isn’t aware of where he will play next term, but the keeper has laid out his requirements to find a new club. 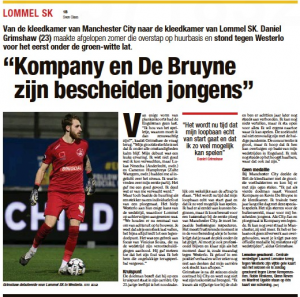 “I came to the club as a five-year-old and am still with them eighteen years later. I can’t tell you anything yet, but I’m open to everything. I want to go somewhere where I can play,” he explained.

“The search will not be easy with the current pandemic. The competition is fierce, but I hope I can convince them based on my matches in England. I’m still aiming for the best, wherever that will be.”