Nottingham Forest could be handed the chance to sign Filip Krovinovic for a second time, with Benfica pushing to get him out of the club this summer.

That’s according to A Bola, who say the player is likely to be sold or loaned out after publicly criticising manager Jorge Jesus.

They explain that Krovinovic was removed from the squad as of yesterday and will face a disciplinary inquiry at the club after private audio in which he criticised and insulted Jesus for leaving him out of a training game, vs Covilha, was made public.

That has only further convinced Benfica to get rid of Krovinovic this summer, with a decision already taken to pursue another loan deal for him.

Benfica would like to loan him to a Portuguese team, but the midfielder prefers to go abroad again after loan spells at West Bromwich Albion and Nottingham Forest.

He is valued at around €6-8m, and while the Portuguese side would like to bring that money in, the ‘likely scenario’ is another loan deal. 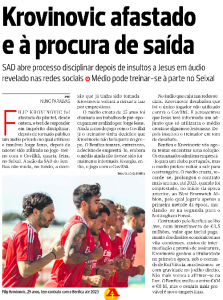 There is no mention of who may be interested at this point, there’s certainly no mention of Nottingham Forest, but it’s likely they’ll be among the first Benfica will call to see if they’re interested.

He managed 19 appearances for Forest between January and the end of last season, so he’s clearly a player they like, and there’s every chance another deal can be struck with this incident pushing him firmly out the door at The Estádio da Luz.