Everton’s move for midfielder Matheus Nunes has been made ‘impossible’ by the club’s failure to appoint Nuno Espirito Santo as their new boss.

That’s according to Record, who say a deal is now off the table for the time being after being particularly close at one point.

As you’ll remember, throughout last month, we covered various reports that Everton were keen on Nunes and seemingly closing in on a deal with Sporting for him.

Indeed, at one point, it appeared he was simply waiting for the call from his agent to take the flight to Merseyside to undergo a medical and sign on the dotted line.

However, it’s had a couple of weeks since anything was heard on the matter before yesterday, it was revealed that Rafa Benitez’s appointment had scuppered the move.

They follow that up today in a piece on potential sales at Sporting and explain Nunes has had ‘concrete interest’, but a move will only happen under the conditions set by those in charge at the Portuguese club.

Nunes was ‘very close’ to joining Everton when it was ‘taken for granted’ that Espirito Santo would be the new man in charge.

However, his move to Tottenham and Benitez’s subsequent arrival ‘made the deal impossible’ at this moment in time. 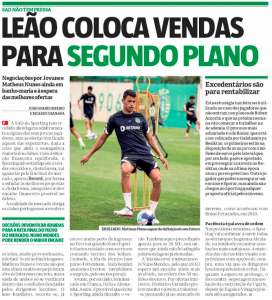 The newspaper does state that situation is ‘at least for now’, suggesting there is still a deal there to be done, but new negotiations will be needed.

Quite why it’s now so difficult isn’t mentioned, but it’s likely got something to do with Jorge Mendes, given he was involved throughout.

From the sounds of it, he’s not very happy at how negotiations regarding Espirito Santo went and has now put a wall up around Nunes as a result.

That’s speculation on our part, to be clear, and Mendes was only collaborating with Nunes’ agency rather than representing him outright, but we wouldn’t be surprised if the reality was very much along those lines.