Today it’s newspaper Record who features a piece saying English clubs have been ‘attentive’ to the 21-year-old’s situation at the Lisbon side.

They write that the Magpies have already contacted the Eagles to get to know if there’s interest from the Portuguese club in negotiating the player’s sale in the summer transfer window.

Even though these first contacts are said to have been ‘exploratory’, Record says there’s a chance the Premier League side will ‘advance to the negotiations table’ with Benfica soon. 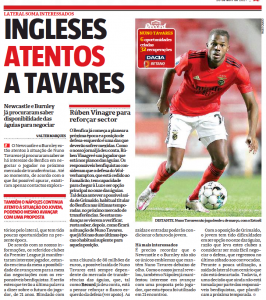 Record claims that Nuno Tavares’ future depends on how Benfica’s summer market will go. The Eagles are currently interested in Wolves fullback Ruben Vinagre, and that could be a sign that the Magpies’ target isn’t that much needed in Lisbon.

Besides Newcastle, other clubs such as Burnley and Napoli are named in the race as well. Even though Tavares is protected by a €88m release clause, previous claims from the Portuguese media said the Eagles would take €30m for the player.