It claimed the representative told the manager Spurs is a ‘complicated club’, and the Special One ignored the advice when taking the offer from the London side.

Now with Jorge Mendes being the most influential agent in the country, Correio da Manhã has something to say about Wolverhampton Wanderers manager Nuno Espírito Santo as well.

The newspaper writes that following the agent’s attitude regarding José Mourinho and Tottenham back in 2019, it ‘doesn’t seem believable’ that the Wolves boss could be taking the same path. 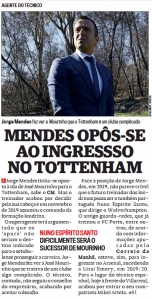 Correio da Manhã learned that Nuno Espírito Santo was actually about to take charge of Arsenal to replace Unai Emery following the Spaniard’s dismissal back in 2019. The job was then taken by Mikel Arteta, who stands there to this day.

Back to Spurs, the newspaper says Espírito Santo will ‘hardly be Mourinho’s successor’ at the club. That certainly has mostly to do with Jorge Mendes’ opinion on the club, and by the looks of it, the move could only happen in case the Wolves boss ignores the agent like the Special One did.