Signing Joe Willock on loan from Arsenal, it was clear Newcastle United needed a new midfielder.

They waited and waited to try and find the right man, and despite targeting other names, they turned their attention to the Arsenal youngster to make up the numbers in Steve Bruce’s squad.

Ahead of Willock in the pecking order, however, appears to have been Celtic’s Olivier Ntcham, who eventually ended up at Marseille, where he is due to arrive today.

The Parkhead resident will move to the south of France on loan until the end of the season, when the Ligue 1 side will be able to decide whether they want to make the move permanent for €6m or not. 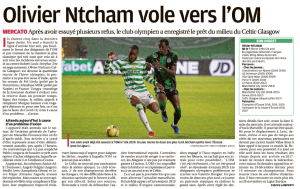 They managed this despite Newcastle wanting the Celtic midfielder, as revealed by La Provence.

In their Tuesday edition, the local newspaper explain the Magpies tried to ‘poach’ the former France U21 international, but ‘needing to offload before strengthening themselves’, the Premier League side ‘weren’t able to make a move’.

That’s when Marseille kicked down the already slightly open door and ‘quickly reached an agreement’ with Celtic.