Home Europe Newcastle owners won’t give up on big signing – Priority for them,...
SHARE

When reading Portuguese newspaper Record today, it’s impossible not to see the big story they have on Newcastle United’s chase for Benfica star Darwin Nunez.

They feature a piece saying the 22-year-old is a ‘priority’ for the Magpies, as he currently stands ‘on top of the list’ for their attacking reinforcements in the January transfer window.

The outlet claims that Newcastle’s owners are ‘desperate’ to escape relegation, and following the first contacts for the signing, they already know that Benfica demand at least €60m for the sale.

It’s also explained why the Eagles can’t accept less than that. Once Darwin moves, 20% is going to his former club Almeria and 10% to his agents. So there’s a big chunk taken away from the Lisbon side. 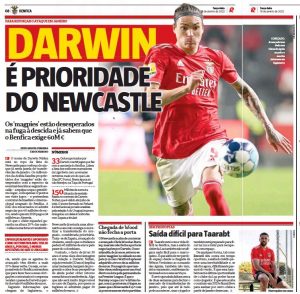 Record then writes that ‘according to information coming from England’, not making clear if they’re referring to the local media or their own sources, the alternative to Darwin is Duvan Zapata. The problem is that he’s already 30 years old, and with few chances of a big move in the future, Newcastle only want to spend €30m on him.

It’s also claimed that the arrival of Chris Wood from Burnley does not stop the Magpies from chasing Darwin.