It was at the start of the month that Toti Gomes returned to Wolverhampton Wanderers from a loan at Swiss side Grasshoppers, and it didn’t take long for him to make his debut for the English club.

Following the call from manager Bruno Lage, the defender was a starter in Wolves’ 3-1 win over Southampton at the weekend, and now admits he wasn’t expecting to see his name in the line-up so soon.

Gomes was interviewed by Portuguese newspaper Record, and talked about the feeling of playing at Molineux for the first time.

“I didn’t imagine it would happen so soon, but it’s the result of a lot of work. I felt very comfortable. I got goosebumps when I took the field. The stadium was full, it was an incredible feeling,” Toti Gomes told Record. 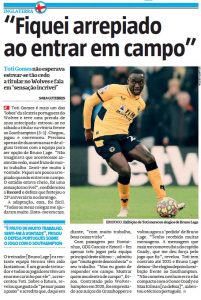 Regarding his quick adaptation, Gomes thanked all his Wolves teammates who’ve been making the process easier.

“All my colleagues helped me a lot. I feel at home. The coach and the rest of the coaching staff have been fantastic. He is a great coach and all the players have great affection for him.

“I have received many messages. The message that moved me the most was from captain Coady, who gave me strength for the game I played.”

Gomes was signed by Wolves in a €1m move from Estoril in the summer of 2020. Back then, he was immediately loaned to Grasshoppers, only now returning to Molineux. With his debut being given soon, he’s now certainly excited about what’s to come at the Premier League side.