On Tuesday, we covered a story about how Newcastle United aren’t currently in the best position to lure Adrien Rabiot to St James’ Park.

The Frenchman could be on the exit path this summer, since his contract at Juventus expires next summer, but it was made clear that if he doesn’t, he would be used by Max Allegri.

That would mean some Champions League football, which Gazzetta dello Sport state is something he wants if he is to leave Turin in the coming months.

That’s why Newcastle might find it difficult to convince him to move, despite all their money, and it appears they’ve already received a no from the midfielder.

The newspaper look at what the summer might have in store for the Frenchman, as Juventus ‘wouldn’t mind making a capital gain’ on a player who arrived on a free.

It’s said the club value him at around €20m, but make it clear ‘he can also leave for less’ should the right offer come along. 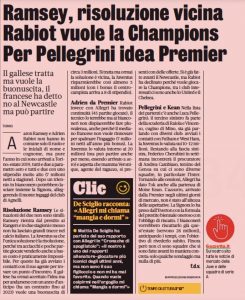 The only club to have ‘already come forward’ to date are Newcastle, but ‘Rabiot has declined because he wants to play the Champions League’.

As we said on Tuesday, it could just be a case of playing the waiting game for the Magpies, and it could all depend on how much Allegri uses him early on in the season, knowing full well there’s a World Cup the midfielder wants to participate in with France.