It wouldn’t a normal summer if Adrien Rabiot wasn’t linked with a move to the Premier League, and we’re glad to announce that it is indeed a normal summer.

A number of English sides are reportedly interested in the Frenchman, who is contracted to Juventus until 2023, including Newcastle United.

They would be competing with clubs capable of offering European football, which is why, according to Corriere dello Sport, the Magpies’ project ‘continues to convince Rabiot little’.

That’s despite them having ‘a lot of money to tempt’ him into a move, because there is one factor working against them.

That is, say the newspaper, that ‘if he were to stay, he would be a Juventus starter again next season’, which is a ‘starting point that cannot be ignored’.

Paul Pogba, who is expected to join in the coming days, will need protecting, and should all this happen, ‘we should start talking for the first time in a concrete way about a renewal’. 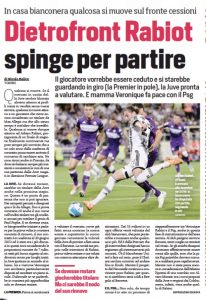 The problem is, he is currently on €7m net + bonuses, and were talks about a new contract take place, the Serie A side would work on a ‘downward agreement’, meaning giving him less money.

That’s hope for Newcastle, because ‘he and mother Veronique don’t seem particularly willing to listen’ to such a plan.

This is where a move to the Premier League could come into play, especially with a World Cup just around the corner, as the player ‘evaluates other destinations with extreme attention’.

Juventus are keeping an exit in mind to, and ‘from €15m upwards, each offer will be evaluated’.

Newcastle, Manchester United and Chelsea are all keen, but there is also hope that a shock return to Paris Saint-Germain could materialise.

Therefore, it seems that Eddie Howe’s best hope of luring the player to St James’ Park is for Juventus to offer a new, cheaper contract and for no one else to come forward.

Should that happen, then perhaps a move to Newcastle could become appealing, as it would mean similar wages and regular football in an important year for the 27-year-old.