With Sandro Ramirez, transfer rumours don’t work gradually. The Malaga player has been linked to half the Premier League over the past year or so, but Ronald Koeman turning up in person to watch him, and being pictured near his agent, underlined that Everton interest is real.

Sandro was then said to have agreed a deal with Atletico Madrid, which seemed strange on several fronts. The Rojiblancos had already agreed terms to sign Alexandre Lacazette from Lyon, and there was every chance Sandro could have found himself on the bench. However, that move was crossed out by Atletico’s failure to have their transfer ban reduced.

That gave fresh hope to Everton, and a social media whirl of Sandro being spotted in Liverpool’s Titanic Hotel has been backed by claims in Spain. Marca, without mentioning the hotel images, say Sandro has travelled to Liverpool to close his transfer to Everton. 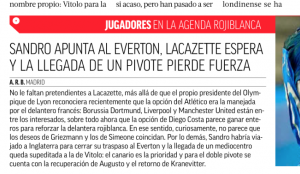 It’s a small piece, and treated matter-of-fact. In the same small article, Marca also point out Atletico’s ban could give Everton’s neighbours Liverpool a chance to sign Lacazette, should Jurgen Klopp see fit.

Malaga Hoy and others are also going with the story of Sandro’s trip to Liverpool, but using the images taken at the Titantic. They point out that Sandro wants his future sorted out before the Euro U21 tournament, which starts on Friday.