Tottenham Hotspur attacker Clinton Njie will remain with Marseille next year, according to further claims in the French media. The Cameroon international spent last season on loan with the Ligue 1 club.

L’Equipe have today reported Tottenham Hotspur have a clause which allows them to bring Njie back to England this summer, and override Marseille’s clause to keep him permanently.

However, it’s been claimed the Premier League side won’t activate this and the player will stay in France. Tottenham’s agreement with Marseille was to loan out Njie, with an obligatory redemption. 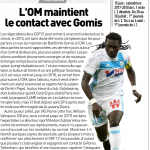 Njie joined Tottenham from Lyon in 2015, but the attacker failed to make an impact in his first season with the North London club.

The 23-year-old made just eight appearances in the Premier League, with all these coming via the substitutes bench.

Subsequently he was loaned out to Marseille last summer as the player wasn’t in the plans of Tottenham manager Mauricio Pochettino.