An eyebrow raising report comes from L’Equipe on Monday, with Crystal Palace dragged further into a possible future with Christophe Galtier.

There’s no issue with the link, Galtier showed his managerial standard at Saint Etienne over a long period of time, turning down repeat offers to move to England, and now he’s a free agent it makes sense for Crystal Palace to have a look.

Galtier is in the rare position of leaving his last job on good terms, wanting to experience something different having managed Saint Etienne since 2009. Crystal Palace have contacted the manager via his agent David Venditelli, and Galtier is now on their shortlist.

Palace made sure to find out whether Galtier remains friends with Eric Cantona. The two grew up together in the Marseille area and played together successfully for France’s youth set-up. 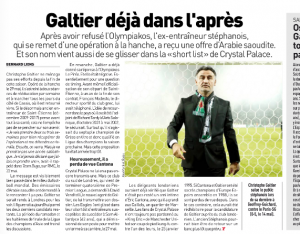 L’Equipe say Cantona’s past with Crystal Palace, kicking an abusive supporter in January 1995, would make a current Galtier friendship with the Manchester United legend ‘fatal’ to his Selhurst Park job prospects.