Preseason games may be just a preparation with no need of great individual performances, but when you’ve just arrived at the club, you better make sure that the first impression you give isn’t so bad.

Emiliano Viviano has just signed for Sporting in a €2m deal from Sampdoria, and in a friendly against Marseille at the weekend he made an incredible mistake, letting the French side open the scoring three minutes into the first half.

This is one of the reasons why, according to A Bola, Sporting are already looking to sell him. His performance, along with the fact that he’s expensive and signed by the former club president, could mean his departure before the start of the season.

And in case he goes, then Sporting could be signing Joel Pereira from Manchester United. A Bola writes that the Portuguese goalkeeper is only arriving in case the Lions sell Viviano first. 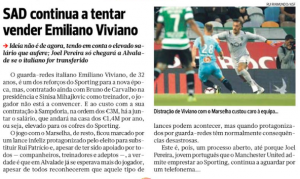 A Bola makes it sound like Pereira would be an easy signing for Sporting. They use words like ‘he’s just waiting for the call’ to show how possible the transfer is.

Earlier this month, the Portuguese media had been saying that Sporting would like to have Pereira permanently, while Manchester United wouldn’t allow that.

The Premier League club see the young goalkeeper as a good bet for the future so want to keep hold of him, and a loan is preferable.

It doesn’t seem like José Mourinho would change his mind, so if Sporting really want the goalkeeper, maybe they will have to accept to have him for only one year.