Home Europe Manchester United star says ‘it’s not easy’ to be ready ‘when you...
SHARE

Manchester United’s priorities in the last transfer window included signing a recognised right winger and Jadon Sancho was their number one target.

The Red Devils failed to complete the deal for the Borussia Dortmund star or for another other experienced player in the same position.

With Mason Greenwood struggling for his best form, Ole Gunnar Solskjaer has used Juan Mata on the right side of United’s attack this season.

The Spaniard, who has had to fight for regular minutes in the past few seasons, has made seven starts in all competitions this season and has managed two goals and two assists in the process.

Manchester United take on Paris Saint-Germain in the Champions League group stage on Wednesday and ahead of the clash between the two sides, L’Equipe interviewed Mata.

When asked how he manages to perform well despite limited playing time, Mata said: “I try to stay strong in my head, to train as best I can, to be physically and mentally ready every time someone calls me. Even if, of course, it’s not always easy to be so when you don’t play every game.”

The French newspaper further quizzed Mata on how he managed to ‘acquire this specific state of mind’. Responding to that, the former Chelsea star said: “When I was fifteen, I left Oviedo / Asturias, the city where I grew up, to join the Real Madrid training centre.

“At that age, when you are away from your parents and friends, you grow up faster. I found myself competing with very talented young people and I didn’t know if I was at their level. I was a little terrified.

“And then, suddenly, I was aware of my qualities, but also of my ability to progress. Since then, every time I face competition, I saw it as an opportunity to improve myself.”

On tomorrow’s clash against PSG, Mata explained: “PSG are an excellent team, who recently took part in the Champions League final. 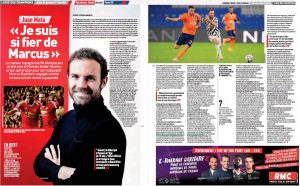 “During our match at the Parc des Princes, we had performed well (2-1 win) but, given the evolution of the group, I am sure that the Parisians will come to Old Trafford to win. We know how dangerous they can be.”