Antonio Rüdiger was initially not included in Frank Lampard’s plans for this season and would have been allowed to leave Chelsea in the last window.

The defender didn’t find a new club and fought his way back into the reckoning at the end of October. He has three appearances in all competitions this campaign, which includes one league start.

Last week, the 27-year-old insisted he was content with his current situation after having difficulties before.

“I’m satisfied with how the situation has developed in the past weeks. Now I see myself as a permanent part of the team. I had a tough time, so I also checked other transfer options but I received positive signals from the coaching team,” he told SID.

Barcelona are looking to sign a new centre-back next month and today’s edition of Mundo Deportivo explains Rüdiger is ‘on the list’ of targets for the Blaugrana.

It’s claimed the Chelsea player has ‘already been offered’ to the Spanish giants. Rüdiger isn’t the first-choice target for the Catalan club because their priority is to sign Eric García.

Should they fail to get the Manchester City defender, Barca will then look to bring in a 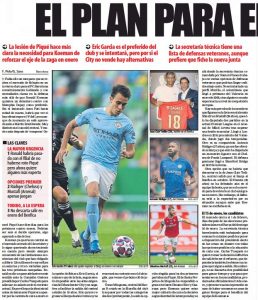 player with experience at the highest level.

Gerard Piqué is set to be out of action for four to six months after suffering an injury in November. His absence makes it vital for Ronald Koeman to have a new centre-back in January and Rüdiger’s name is ‘on the list’ at the Camp Nou.