Home Europe Manchester United set to be handed signing opportunity for less than half...
SHARE

We now head to another transfer window where Kalidou Koulibaly will continue being linked to the top clubs in Europe. However, a new scenario should be found this time.

Italian outlet Il Mattino describes the player’s situation, naming Manchester United as one of the contenders for his signing.

They say the Red Devils had been interested in the past, when Napoli where working strong to protect the defender, and will ‘certainly’ be back.

The difference now is thagt the doors ‘could be open’ with ‘lower numbers’. The Serie A side are looking to have a cut in their payroll, and selling Koulibaly would be crucial for that. 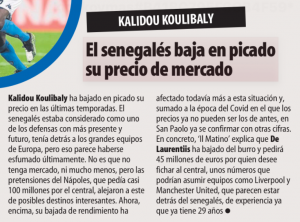 Catalan outlet Mundo Deportivo is another one with a piece on the defender today, also highlighting the fact that his price is going down.

Their report also quotes Il Mattino to say that Napoli president Aurelio De Laurentiis is set to demand only €45m for his transfer. Less than half the €100m from the past few years, and presenting Koulibaly on a transfer platter.

Mundo Deportivo quickly links the likes of Manchester United and Liverpool as the clubs who ‘seem to be after’ Koulibaly and could take advantage of this discount in the summer window.