Alex Telles to Manchester United is a mess of a rumour.

Normally, when a player is thought to be leaving a Portuguese club for a Premier League side, it’s the media in Portugal who lead with things. This story started that way, with claims from the country of Pini Zahavi trying to build a deal with Ole Gunnar Solskjaer’s side, yet since then many of the updates, or supposed updates, have been coming from elsewhere.

On Monday, The Guardian said Manchester United are ‘trying to drive down’ the price to a ‘maximum of €25m’, which is surprising for the Portuguese media, considering they’ve been told such an amount would quite easily be accepted.

Tuesday’s edition of O Jogo says that Porto are growing concerned, because despite all the rumours, United haven’t yet made a proposal of any kind. Porto know they’d need to sign a replacement if Telles leaves so they’d prefer any interested clubs just get on with things rather than dancing through the media. 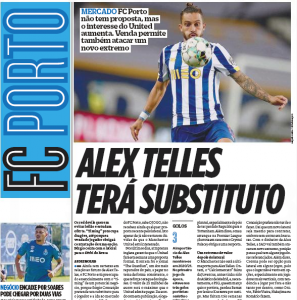 A bright note is O Jogo saying: ‘Knowledgeable sources of the process assure our newspaper that the talks have been going on for some time and are already at an advanced stage.’

The assumption would be those sources are close to the player’s agent, Pini Zahavi.

To be clear, O Jogo don’t imply a move is imminent.

Over at Record, their entire take today is that Manchester United don’t have any competition. Juventus interest, as weakly claimed in Italy on Monday, is dismissed.

A Bola cover claims from The Guardian, and don’t really add anything. They actually sound a little bored, stating Porto want €20m and ‘it is only necessary that Manchester United write the corresponding cheque’ to complete the deal.

The message from Portugal appears to be: This isn’t a difficult transfer to pull off, and it’s all in the hands of those in charge at Old Trafford.

If you’re a Manchester United fan wanting to find optimism, then a reason for such would be the Premier League club seemingly telling their local media Porto are asking for more than they actually are, which is exactly the same as what happened with Bruno Fernandes.