On September 10th, Het Nieuwsblad explained Liverpool have renewed their interest in Jérémy Doku after failing to sign the youngster in the past.

A day later, Anderlecht CEO Karel van Eetvelt stressed the forward will only leave the club if there’s a “crazy offer”.

According to Het Belang van Limburg, the Belgian club need an offer around €30m to sanction the 18-year-old’s sale.

Vincent Kompany’s side don’t need to sell Doku, but his sale would help the club ‘significantly reduce the debts’, which stand at around €95m.

Reds interest is backed up in today’s newspaper, and it’s stated that Jürgen Klopp’s side view Doku as Sadio Mané’s long-term successor at Anfield.

According to the report, the possibility of Liverpool knocking on Anderlecht’s door to sign the attacker before the window closes ‘cannot be ruled out’.

HBVL adds whether or not the Jupiler Pro League side will sell the player this summer will not just depend on the fee they will receive, but also on the transfer ‘formula’. That is vital as Anderlecht would prefer to sell and then take him on loan for this season. 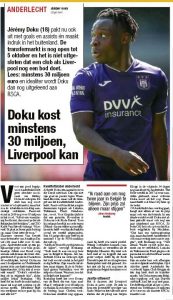 Youri Tielemans’ move to AS Monaco in 2017 helped Anderlecht fetch €26m, and the report states Doku is ‘destined’ to beat the current Leicester City player to become the ‘most expensive’ sale of the Belgian club.

If Liverpool want to sign Doku this summer, they need to propose a transfer ‘formula’ that can convince Anderlecht and also meet his €30m asking price. Whether or not they will meet those conditions remains to be seen.